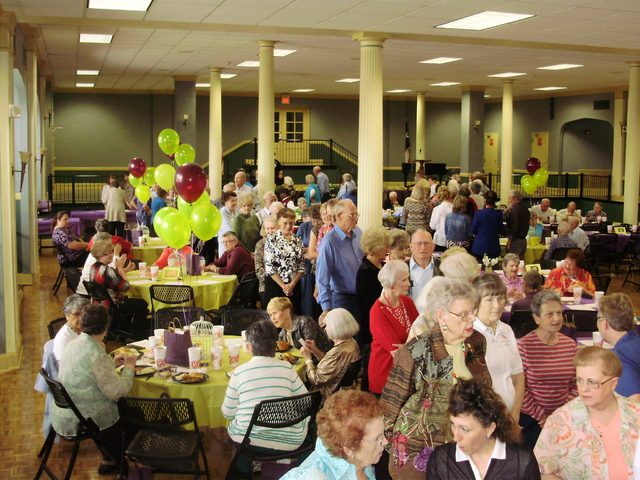 Joshua Brummett/Herald Democrat - Hundreds of participants in the Retired and Senior Volunteer Program were honored at a banquet on Monday afternoon in Sherman.

“I think the biggest encouragement you can give someone is fried chicken for lunch,” said Tillman Boyd, the director of Basic Food Pantry in Bonham. Fried chicken was plentiful, but the 200-odd fellow participants in the Retired and Senior Volunteers Program to whom he was speaking seemed to need no further encouragement. They had already donated thousands of hours of their time to local nonprofits and charities.

Both the chicken and the encouragement were found at the annual Retired and Senior Volunteers Program Recognition Banquet, held Monday afternoon in the Sherman municipal ballroom. RSVP, a Senior Corps program administered locally by the Texoma Council of Governments, helps find ways for senior citizens to volunteer in the community.

Currently, there are 634 registered volunteers in the program working at 71 sites across Fannin, Cooke, and Grayson counties.

Jewel Carter, an RSVP participant, said she wasn’t sure what to do with herself after retiring from a long career teaching for Bells ISD. “I retired in 2001, lost my husband in 2003, and then sat around for five years doing nothing,” Carter said. “My son came to me and said, ‘Mom, I found you a job.’ I said to him, ‘I didn’t know I was looking for one.'”

Carter has now been a volunteer at the SNAP center in Bells for 7 years. “It just makes me happy,” Carter said.

With over 600 seniors donating so much of their time, RSVP has a huge impact on the Texoma community, said TCOG’s Senior Corps Program Manager Virginia Rhodes. “You can’t walk into a hospital without meeting an RSVP volunteer,” said Rhodes. For everything from health clinics to food pantries, Rhodes said many organizations simply wouldn’t be able to function without RSVP support. “These volunteers help bridge the gap between the number of employees places have and actually getting the job done,” said Rhodes.

“We have such a vast amount of people from (age) 75 to 90, and they want to work,” said Rhodes. “They want to help. They live for it. They’ve earned the right to go sit down for a while, but they just don’t want to.”

That urge to help can benefit more than the community – it also benefits the seniors themselves.

“People who volunteer continue to live longer, be happier, make more friends, and even learn new skills,” said Boyd, noting that staying active and giving back can make retirement a productive and happy time.

Rhodes invited all Texoma residents over age 55 to join the program. “The only requirement is a heart to serve and an hour a month,” said Rhodes.

Although the event honored all those who volunteered, special recognition was given to Gwen Coleman, Dru DeArmond, June Leverette, Billie Scheidt, and Gary Vernon, who earned lifetime achievement awards for having given over 4,000 volunteer hours through the program. Billy Cate, Thema Hosea, and Vera Kennedy received Spirit of Service awards for their volunteer work in Fannin, Cooke, and Grayson counties, respectively.