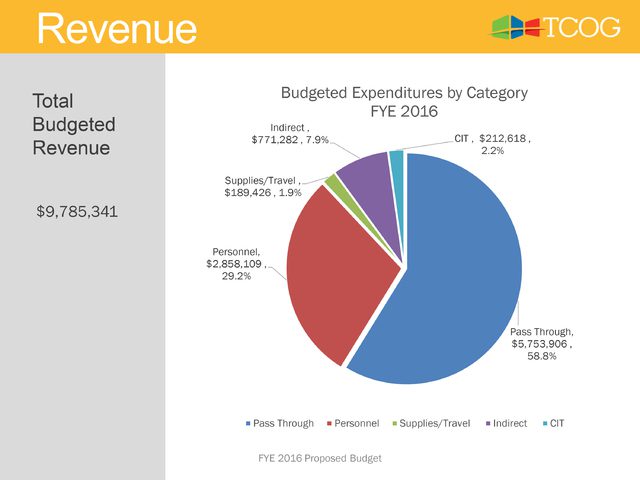 Texoma Council of Governments approved a $9.78 million budget for the upcoming fiscal year recently. The budget covers programs from May 1 through April 30, 2016. The new budget shows an increase of $1.2 million in revenue over last year.

Finance Director Stacee Sloan said the budget increased due to a grant from Aging and Disability Resource Center (ADRC) and economic development projects with Callisburg and Whitewright.

TCOG’s pass through expense is estimated to be $5.75 million, which is 58.8 percent of expenditures. Sloan said pass through goes straight through the organization and back into the community. The percent change for pass through has increased almost 4 percentage points.

“From 2015 to 2016, we’re estimating we’re going to spend more by almost 4 percentage points in pass through funding,” Sloan said. “We like to see that increase from year to year.”

When it comes to sources of revenue, federal funds make up most of the budget with $6.36 million in federal grants revenue.

In addition to the budgeted federal funds, Sloan said TCOG also manages $1.5 million of Texoma Housing Partners, which is funded through an administrative contract. The money is not coming to TCOG from the U.S. Department of Housing and Development.

The Board approved a 2 percent cost of living raise for all regular employees. The Board approved an increase of $110,665 for the salary budget, which, in addition to the raises, allows TCOG to hire two full-time employees. Sloan said TCOG may hire two employees to help with expanding programs, such as the economic development projects with Callisburg and Whitewright.

Only one board member, Grayson County Commissioner Phyllis James, opposed the motion to approve the 2016 budget. James commended TCOG Executive Director Susan Thomas and the staff for all TCOG programs and services, but she said she wishes there was a way to repair TCOG’s elevator and parking lot without having to refinance the building.

“I think the budget should have more things where you have capital improvement that grows without having to refinance,” James said.

The capital expenditure budget is $120,000. Elevator renovations would cost $95,000, while the parking lot improvement would be $25,000. Acting as president, Board Vice President Keith Clegg said he understands James’ position and appreciated her opinion because the Board is striving to improve as a body.

Clegg also commended TCOG for drawing in more than $1 million in revenue projected to come in while operating with at the same staffing level.

“It’s about growing the programs, growing the ways that we can promote the quality of life,” Thomas said. “If we’re going to make life better, we need to be able to serve more people in ways that we are not already doing.”