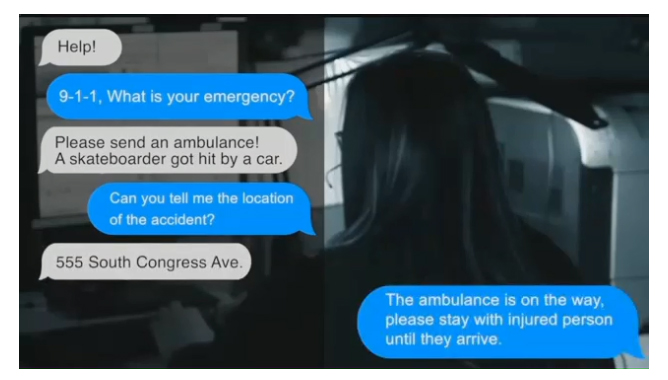 KTEN.com – No One Gets You Closer

SHERMAN, Texas — There’s a new way to call for help in Grayson, Cooke and Fannin counties. The Texoma Council of Governments says Text to 911 is now available.

Now, in addition to calling 911, you can text information to emergency responders as long as your cell phone is on one of the four major wireless carriers: Verizon, AT&T, T-Mobile or Sprint.

“We wanted to make sure that Text to 911 is available for those that may not be able to speak, or the situation is more safe if they were able to text,” explained Grayson County Sheriff’s Office spokeswoman Capt. Sarah Bigham.

Once you send a Text to 911 message, you’ll get a reply from a 911 call center identifying which department it is and asking for more information about your emergency.

“Individuals still need to know where they are located — just like with any 911 call — so it helps the dispatchers get the right emergency response to them,” Bigham said.

If Text to 911 isn’t available in your area, you will get a message back asking you to call 911.

While the new service doesn’t let you send picture or video messages, police say it’s a great option for those who may have difficulty speaking on the phone or are in a situation where talking would be dangerous.

“There are some situations where verbal communication is going to cause more harm to an individual, and so that’s why this program is being pushed out all over the State of Texas, and, I believe, nationwide,” Bigham said. “I believe it’s coming on in smaller groups, and so we need to make the public aware when it’s available in their area.”

In Oklahoma, Text to 911 is currently available only in in Rogers County in the northeast corner of the state, according to information from the Federal Communications Commission.

Additional Coverage on this topic:

KXII – You can now text 911 in Grayson, Fannin, Cooke counties