Texas is a deregulated energy market, meaning consumers can choose from a multitude of energy providers in the area, resulting in more competition and lower prices for consumers.

There are 4 active energy power plants in Texoma; 3 produce electricity, 1 produces compressed natural gas. Commissioned in 2014, the Sherman Panda Power Plant is a natural gas electricity generation facility serving the North Texas Area in the ERCOT power grid. It is expected to be one of the cleanest natural gas facilities in the United States through a new efficient technique known as “combined cycling.” The plant is estimated to have created over 800 jobs and is estimated to input $1.7 billion into the North Texas Area during construction and the first ten years of its operation. It has a maximum capacity of 758 Megawatts, equivalent to up to 250,000 homes.

The Wolf Ridge Wind is a located in Cooke County and began operation in 2008. It is a wind energy power plant owned and operated by a subsidiary of NextEra Energy Resources. It is a 112.5-megawatt wind generation plant containing 75 1.5-megawatt GE wind turbines that are capable of generating enough electricity to power about 34,000 homes. Each of these wind turbines is 262 feet tall from the ground to the hub in the center of the blades. Its energy production has been very steady throughout the years. Outputs for all three electric plants are shown in Figure 15.

SemGas is a separate privately-owned cryogenic processing plant, which is a facility where natural gas flowing from wells is cooled to subzero temperatures in order to condense liquids or natural gas liquids. The plant is found in Sherman and has approximately 340 miles of high and low-pressure gathering pipeline. SemGas does not produce electricity – they sell their compressed natural gas to Atmos. 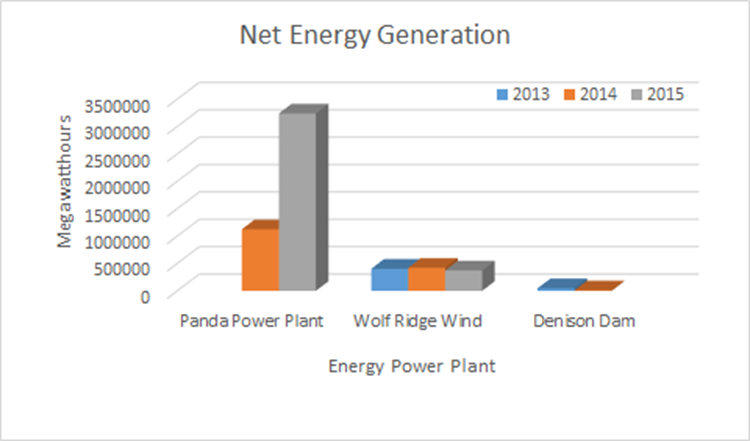 It has been demonstrated that while having low diversity and high concentration of industry may result in lower unemployment rates in the short term, having a more diversified economy makes a region more resilient to future economic shocks or stress. Across the region there is room for improvement in industry diversity, so long-term public and private initiatives to bolster industry diversity will be a powerful buffer to future downturn. These can also serve as a useful metric to show improvement in resilience. Figures 16, 17, and 18 below show the industrial sectors and diversity for the three counties in the Texoma region.

As shown in Figure 16, Grayson County shows high diversity of industry, with a greater industrial and functional diversity than 80% of US counties. Its occupational diversity is still above average, but it doesn’t match the level of the other two metrics, indicating that though many industry types thrive in the area, employment across these types is still somewhat uneven, evident in the radar chart below. 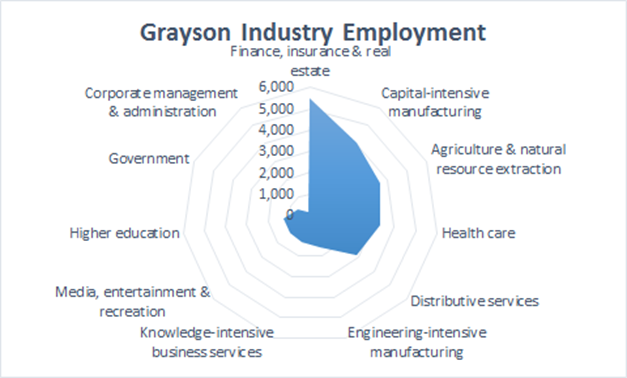 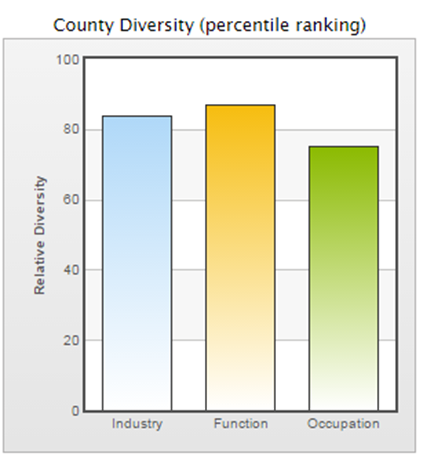 As shown in Figure 17, Fannin County shows slightly above average industry and functional diversity, but like Grayson, this diversity is not reflected in employment distribution. In order to further diversify and bolster regional economic resilience, a long-term plan to diversify the local workforce would be useful. 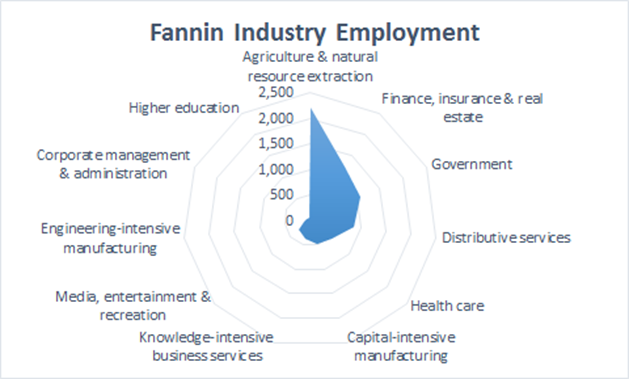 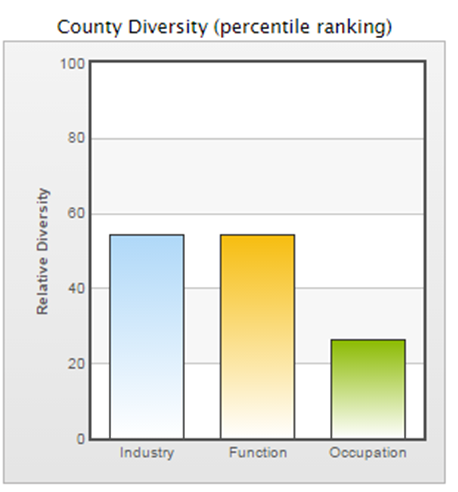 Cooke County (Figure 18) shows about average industry diversity, but would also do well to build employment in understaffed industry clusters. 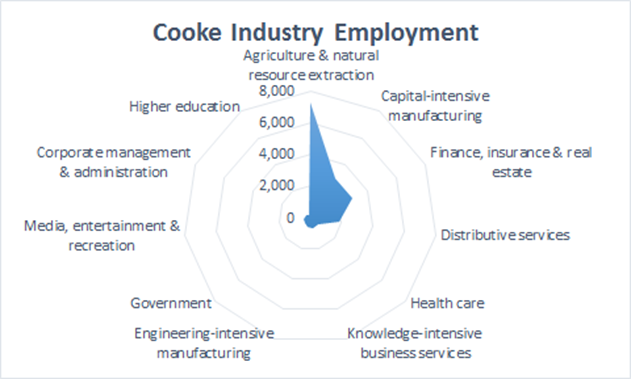 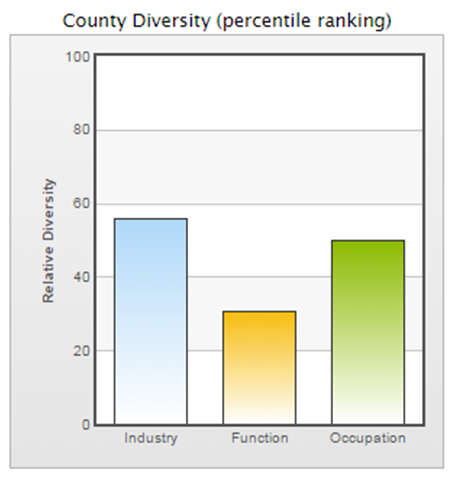 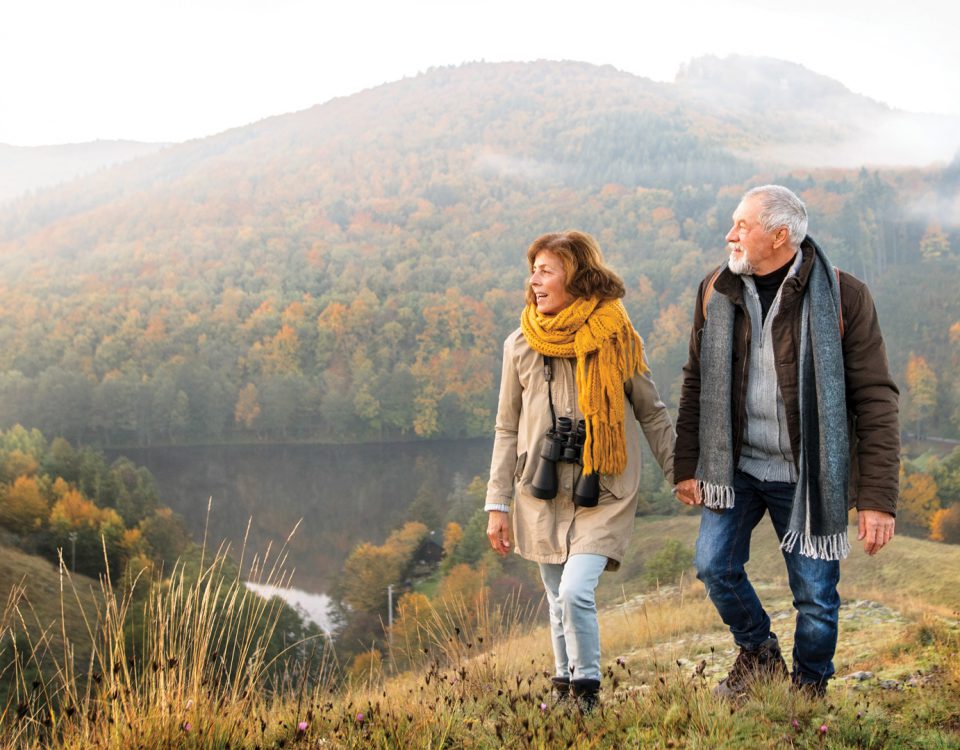